Evolution in the Knowledge About Interior Firefighting

Most of us followed the basic firefighter course years ago. For some this may even be decades ago. Since that time, say the 80’s, society has gone through a major transition. Some bought their first car back in those days. If we would look at that first car and compare it with the new cars we buy today, we would notice some major differences.

The same statement goes for the way we are constructing house and buildings. Today houses are constructed with high performance double glazing or even triple glazing.

Houses and buildings have thicker thermal insulation layers. We even build airtight passive houses. It is obvious that the fires we have to fight in these buildings also changed. The fire department is nowadays sometimes confronted with fires that, about 40 years ago, not even existed.

Luckily our tools & gear also improved. The nozzle from today hardly resembles with the normalized nozzle from the old days. And the knowledge about fire, the fire science, has also evolved. So let’s have a closer look. With these articles we want to see where we are today: old knowledge which is still relevant as well as the new approaches to firefighting. In this first article we start with two themes that always have been around: the fire triangle and the ventilated fire behavior.

Everybody knows the fire triangle model. It is being used to explain the start of combustion. The three components are fuel, air (oxygen) and (activation-)energy. The word “energy” is often replaced by temperature or heat in this context. These three components need to be present in sufficient quantities to get the combustion going.

The process of combustion is actually a chemical interaction between fuel particles and oxygen. This process produces heat (energy). To start this process there has to be an energy source available. This can be a candle, an overcharged electrical wire, … 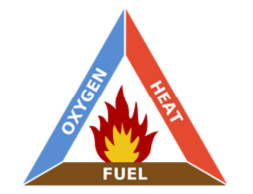 Once the combustion is going and the is fire started, it consumes oxygen. In the air there normally is 21% oxygen present. A fire in a closed compartment consumes so much oxygen that the oxygen levels in the compartment actually go down. At a certain point the combustion process stops because of lack of oxygen.

In general it is stated that combustion will stop with oxygen levels at or below of 14% to 15%. This is very easy demonstrated by lighting a candle an placing it in a glass bell. At that time the candle is actually burning in a closed compartment. The air (oxygen) present in the compartment is consumed and eventually the candle will go out by itself.

Sometimes the fire quadrangle is mentioned. In that case the ratio between air and fuel is also taken into account. Let’s say we put some wood shavings in bowl. It will be very easy to ignite. The wood shavings have a big surface exposed to air. This means there is a good fuel/air ratio.

If we would try to put a wooden beam on fire with the same ignition source it wouldn’t work. The surface of the wooden beam exposed to air is in fact a lot smaller compared to the wood shavings. With the wooden beam we have a bad fuel/air ratio.

1.3 The role of the fire triangle in rapid fire progress

A rather simple example of this is backdraft. Prior to backdraft there is a rich mixture with a lack of oxygen. The temperature in the compartment assures that two sides of the fire triangle are present:fuel and energy.

It is only when we add oxygen, the third side, into the compartment that backdraft can occur. In other words: we need to have all three sides of the firetriangle to get a backdraft. This also goes for all the other rapid fire phenomena.

The burning regime plays a crucial role in the fire development. The quantity of air available to the fire will determine the regime of the fire. Because of this we have two kinds of fire. The ventilated fire is historically seen the fire that we came across the most. This kind of fire typically has enough ventilation (air supply) to keep going.

2.1 Ignition and start of the fire

At a certain moment in time there will be an ignition. In each compartment there normally is 21% oxygen present. So at the start of the fire there is plenty of oxygen for the fire to keep going. After some time the oxygen will be replaced by the smoke produced by the fire. The percentage of oxygen in the room will decrease.

Therefore we can say that during this phase a fire is fuel controlled. This means that the quantity of fuel will determine how fast the fire can grow.

In the starting phase the energy source (for example a cigarette) will interact with a flammable product. This flammable product will initially produce smoke. In other words, after the ignition we get a smoldering fire. In general more and more fuel will get involved into the fire. The surface of the fire will become bigger and the temperature will start to rise.

A little later the rising smoke will ignite. These flames in itself produce radiant heat. As soon as there are flames in the smoke, the combustion process will accelerate.

The radiant heat coming from the flames can reach further. The temperature of objects nearby the fire will start to increase. When these objects received sufficient heat, they will first emit vapor and then pyrolysis gases. Both gasses will be light-colored (white to gray).

As soon as the rising smoke above the starting fire is showing flames the growth phase has started. Within the compartment it is now very obvious that there is a fire going.

There is plenty of smoke visible and the temperature is obviously rising. The smoke layer will start to descend. It is built up by the rising smoke of the fire and the pyrolysis gasses coming from the radiated objects in the room.

Figure 2 Establishment of the neutral zone in an attack cell. Above we find dark grey smoke. Below there is still a good visibility. (Picture: Stef Vandersmissen – Zaventem Fire department)

With the growing fire the smoke layer will come down. The speed of this evolution is an indicator that tells us how fast the fire is growing. A fast lowering smoke layer indicates a fast developing fire and is very dangerous.

At a certain time flames within the rising smoke will hit the ceiling and they will be propagating horizontally along the ceiling. At that point there is a flame front within the smoke layer.

This flame front will advance away from the seat of the fire through the smoke. This phenomenon is called a roll-over. The appearance of a rollover marks the end of the growth phase of the fire. Because of the radiant heat coming from the smoke layer the ambient temperature will now rise very quickly. Flashover will occur.

During the growth phase more and more fuel becomes involved in the fire. The front of flames will grow and the volume of the fire also will become larger. The fire needs more and more oxygen. At the same time the percentage of oxygen in the compartment will start to go down. Especially in the upper zone of the compartment the air becomes polluted with smoke from the combustion. The fire is still fuel controlled but is evolving towards a ventilation controlled fire.

During the growth phase all the objects in the compartment started to pyrolyse. The combustion process produced a lot of smoke. This smoke contains a certain amount of flammable gasses like CO. The hot smoke layer is essentially a reservoir of hot gaseous fuel. With the roll over this reservoir ignites.

Temperatures will then rise quickly. In a few seconds the fire in one spot of a compartment evolves to a fire that engulfs the complete compartment. We then see the transition of a two dimensional fire to a three dimensional fire.

This means we can define a flashover as:

Flashover is a sudden and continuing transition from a developing fire to a fully developed fire.

After the flashover the whole compartment is fully engulfed in fire. The amount of fuel taking part in the combustion process has become a lot bigger. Therefore the fire now needs more oxygen than before the flashover. The fire has become ventilation controlled. This happens because in a compartment a fully developed fire needs a lot more oxygen than possibly can be provided through ventilation. 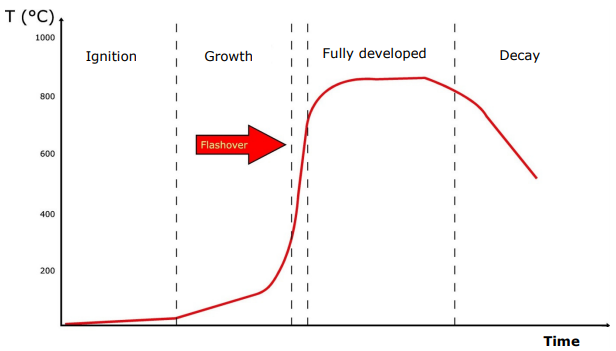 Once a fire is post-flashover the whole compartment is on fire. Anything within the compartment is lost. The fire resistance of the construction elements surrounding the fire (floor, ceiling, walls,…) will determine if the fire stays contained or finds its way to other compartments. If a door is left open the adjoining room will quickly evolve to flashover. It’s possible that you have a fully developed fire (post flashover) in one room and a fire in developing phase (pre flashover) in the next room. The compartment with the fully developed fire will burn down completely. The fire is at that time ventilation controlled. It will keep on going till it runs out of fuel.

While the fire is going it will consume more and more fuel. At the end of the burning phase the intensity of the fire will go down. The production of smoke will also become less. This way the quantity of inflowing air increases. The amount of fuel involved in the combustion will become less while the amount of oxygen will rise. At some time the burning regime will go back from ventilation controlled to fuel controlled.

During the decay of the fire there are still objects that are hot enough to continue to pyrolyse. The intensity of the fire might be a lot less, the continuous release of pyrolysis gasses remains a risk for the firefighters.