Whether your first due is a highly populated urban area or a dimly populated rural area, you have some vacant structures that you may face. Even if your department doesn’t respond on a large number of vacant or unoccupied fires, it is a topic that should be covered. To begin we must first have an understanding of the word vacant and unoccupied. According to Webster Dictionary the definition of the word vacant & unoccupied is “not lived in”. When talking about a vacant house “not lived in” is the beginning and end of what most people know on the subject. However, there are many other terms to know when talking on this subject.

These three words are only a tip to the iceberg when it comes to this topic. What does not lived in really mean? Of course the obvious, no one lives there. But, can there be occupied vacant houses? The answer to this question will always be yes. Today, will we focus on sizing up vacant structures during pre-planning and under fire conditions. Before we go any farther I want to say that I do not support running into every burning building or labeling yourself an aggressive interior firefighter. I am advocating that you step up and be a firefighter, use your brain and training. Know when to attack from an offensive standpoint as well as a defensive one.

Our first picture is the front door to an out of business grocery store. Knowing that this store is out of business is crucial if you are struck for a working fire in this building. First, you will not be worried about performing rescues on the same magnitude as you would if this store was open and operating during rush hours. Second, if you know that it’s closed, depending on how long it’s been closed, the structural stability of the building may have weakened. Now just because the store is out business does not mean no one is ever in there.

This is a view inside of the same store as seen in the first picture. As you can see in this picture, there are a lot of items stored in here you wouldn’t find in a grocery store. It looks as though someone is using this building as a storage area or it could possibly even be a work area from this one picture. Now, what can this mean? At any given point if you are sent here for a fire there could be someone inside this “vacant” store. Whether putting something in storage, taking something out, or doing some work. 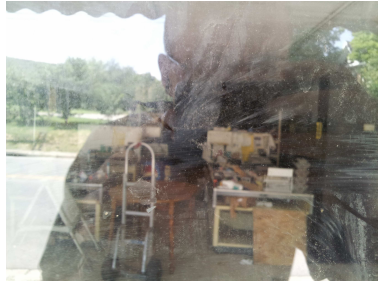 With today’s fire growth potential and available personnel, would you send someone in if you arrive to this building on fire? With static size up factors that include, a fire house is about ½ mile away; adequate water supply and time of day what would your initial Incident Action Plan be? Obtaining as much information as possible about the call is vital when making that pivotal decision to commit resources to the interior.

Next, we will go over some preplanning of a building as it is being torn down. I waited to snap pictures of this one until it was being demolished so I could get some better angles. This building was last used a furniture warehouse, therefore the main part of this building is wide open. It’s not very noticeable, but in the center of the structure the roof has begun to collapse. This collapse was pre demolition and was completely unnoticeable from the Alpha side of the building. However, if a 360 degree assessment is performed, you would have found it when you made it to the Charlie side. 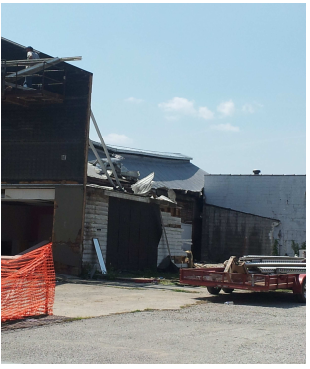 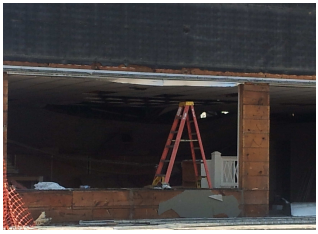 In this picture above you will note that deep inside the structure you can see the collapsed ceiling. Obviously this building is not structurally sound and therefore, under the conditions presented, is not safe for firefighting operations.

Add in the fact that it is under demolition and that adds to the list of reasons it is unsafe. One definition of demolition is “the act or process of wrecking or destroying”, knowing the difference between this and construction, which is “the building of something”, is vital information. When a building is in the demolition phase the building is obviously being destroyed which weakens the rest of the structure posing even more of a collapse hazard for us.

If there was a fire in this structure an adequate 360 degree assessment would reveal the collapsed ceiling. The closest responding fire house is less than ¼ of a mile, total response consist of staff officers, 2 engines, 1 aerial, and 1 rescue and each unit has minimal staffing. Taking into consideration building size, structural stability, and resources all operations should be defensive. The aerial should operate their elevated master, and one or both engines would either use ground monitors or deluge guns.

Next let’s talk about a very common problems faced when operating a fire in any vacant structure; squatters. What is a squatter exactly? A squatter is anyone who stays in a building (usually residential) and does not own, rent or have lawful permission to stay there. Squatters pose a huge problem when it comes to choosing a mode of attack on a vacant structure. How do we know whether a vacant building has squatters or not? The best way to find out is to search.

The two following pictures are good indications of possible squatters. 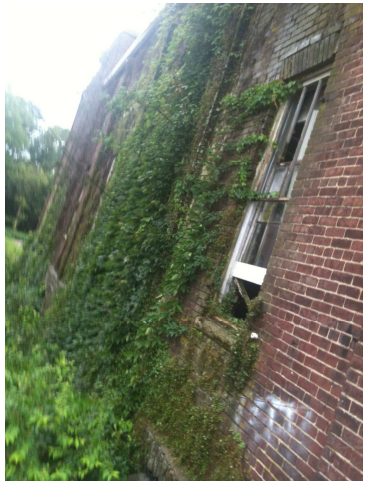 In this picture you will notice an open window; also if you look closely the window is being held open by a piece of wood. This building was a feed mill, just because it is not a vacant residential does not mean you will not encounter a squatter in here. Often squatters will group together in large structures such as these.

You are sent to this building for a reported fire at 0200 hours on a cold winter morning, this being a vacant building squatters should be one of the first things to go through your mind. Often squatters will start small fires inside these large buildings to stay warm, resulting in large fires. Knowing this information and noticing the open window, I would send crews in for extinguishment and search.

This particular building is less than 1/10 of a mile from a fire house with one engine, one EC, and one BC. Also there are two fire houses each two miles away, one housing one ladder and one EC, and the other housing one rescue engine and one EC. With minimal staffing on all apparatus, perform a coordinated search and extinguishment while
insuring you are connecting to an adequate water supply.

No matter the size of the operation, always have a designated rapid intervention team ready to go.

Before we go into vacant residential structures let us talk for a minute about one fast and simple way a department can pre-plan for squatters. At one point in our career almost every single one of us takes some kind of training on search and rescue. In these classes we are taught how to mark the outside of building with lines, boxes, and dots representing different things. We can take the base line idea and apply this to vacant structures in our first dues.

Within your department you can have identification marks on the outside of know vacant structures. One quick example would be an identification marking for a vacant structure that is hazardous to be in under non-fire conditions (-), a vacant that is structurally sound (+), a vacant without known squatters (/), and a vacant with known squatters (*). You can pre-plan and identify these structures as individual crews or enlist the help of local law enforcement.

This is just a quick, down and dirty example of one way to identify known vacant structures. As with any pre-plan in the fire service, this is something that is ever changing and that we must constantly reevaluate. We can do this by going over the different labels as a weekly crew training, however we still have to go further than this. As squatters are known to pick up and move from house to house, there will need to be a timeline in place on how often you redo your pre-plan of these structures.

This photo of a vacant residential where chairs line the front pouch indicating someone may use the house for something. If you were to have pre-planned the above structure, you probably would have found the sign over the mail box to the left of the front door. I couldn’t zoom in on this picture, but the sign says “No mail deliveries, please!” This should be another warning sign that this has become a vacant house. If sent to this house for a structure fire it should be handled with the mindset that it is occupied. Often the warning signs, such as open doors or windows, may be hidden by the fire. Examples would be fire coming out a door or a window. If this house was survivable, it should be treated with an offensive attack while searching for possible squatters or actual residents. 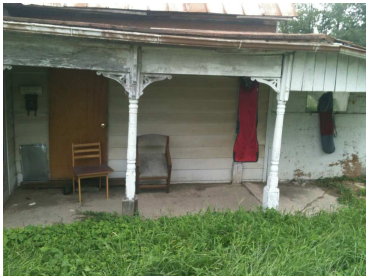 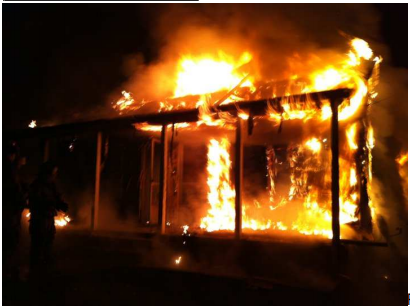 The above picture is of a vacant structure fire in my first due. Upon arrival fire crews found fire through-out in a two story duplex with second floor roof collapse. Due to fire load and structure stability, command chose a defensive attack. In some instances vacant structures may have been burning long before anyone made a call. There can be various reasons for this. Time before it was noticed, location, of structure, and arson.

No matter what the circumstances when you arrive on a fire with extension such as this, command should operate in a defensive mindset. This vacant did not have any squatters in it; however whether it is a vacant with squatters or occupied with residents, there are fires that we cannot safely send crews into. Knowing when to go defensive on fires such as these will mean the difference between life and death for your members. Remember, risk a lot to save a lot and risk nothing to save nothing.

Be aware of the various types of building you may find a squatter in and train on sizing up a structure before going offensive or defensive. When possible, all vacant structures should be searched in case of squatters.