Please review this information on a firefighter line of duty death. This quote from the story really sums up the invisible dangers of electricity. It appears that FF Barker was electrocuted without actually touching the building. The electricity from the power lines on the storage building moved through the building and unpaved ground to Barker. They said the ground was saturated with rainwater that accompanied heavy winds, which helped conduct the electricity

This is phenomenon is known as step potential which I have attached some additional information for you to share with you members. As we get into storm season remember this could be anyone. 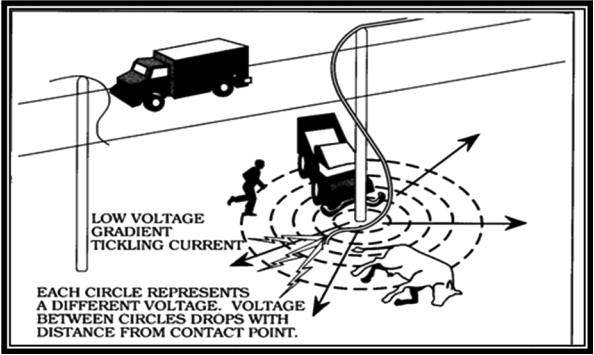 Ground Gradient is a term used to describe the electrical field established around the current’s point of entry into the ground from SSG’S, downed conductor, or other source (for example, backhoe boom or truck outriggers) into the earth.

1. The electrical field created in these situations dissipates as the distance from the point of entry increases. The dissipation creates a difference in potential between any given two points in the
electrical field. (See example illustration).

2. The difference in potential decreases rapidly as the distance from the point of entry increases.

Step potential describes the difference in potential that exists between two points in a ground gradient.

1. The difference in potential between a person’s feet can cause current to flow through a person’s body.

2. Step potential is usually negligible, except for where a downed conductor or severe fault to ground exists.

3. Step potential can be eliminated by keeping the feet together or by keeping only one foot in contact with the earth at a time.

1. Workers on the ground and on a pole encounter touch potential more than step potential.

2. Touch potential is normally more severe than step potential due to the higher difference in potential encountered.