Sometimes we pull up on fires that have us beat before we get there. When this happens, we reluctantly make the call to go defensive to save what we can and prevent the fire from doing any more damage. Sometimes that involves opening overhead doors to give access to hose streams, whether they be hand-lines,
ground based master streams or aerial mounted master streams placed at low angles. In order to allow these streams to do their jobs and cut off the fire and eventually extinguish it we must open the overhead doors in a fashion that allows the most access to the interior space as possible. That is what this article seeks to explore.

When given the order to open an overhead garage door most of us will gravitate toward a power saw. It is the fastest and most efficient tool for the job after all. Depending on the door construction, either we can use a rotary saw with a metal cutting fiber blade or a carbide tipped multi-purpose blade, or a chainsaw. If using a chainsaw, even on a wood constructed door, you should ensure you have a carbide tipped multi-purpose chain in place on the bar because there will still be metal components that need to be cut on the other side of the wood panels. Most, however, will gravitate to the rotary saw.

Once we have chosen our saw and we approach the door we have to choose our method of opening the door. This is where we need to keep our mission in mind; opening the door to allow access to the interior for hose stream reach and penetration in order to cut the fire off and eventually extinguish it. Unfortunately, this is where most of us revert to our initial training and our initial training usually was very narrow in the choices it gave us for opening overhead doors. Namely, we were taught the teepee cut. 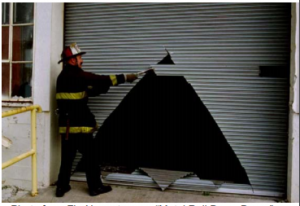 The teepee cut was originally developed as a rapid forcible entry cut for rolling overhead doors of slat construction. It was meant to give firefighters an entry point through which to aggressively attack a fire and the slats to be pulled behind, enlarging the hole and allowing for a larger exit and ventilation hole.

The problem with the teepee cut, however, is that it is very narrow at the top, does not allow the door to be raised once the hoseline is advanced through it (unless the bottom rail is cut which it rarely is), and the cut is rarely finalized by pulling the slats to enlarge the hole. It also uses a lot of blade on rotary saws that still use the fiber metal cutting discs, which risks not getting through all of the door and structural members as the cutting disc, gets smaller. The teepee was also almost exclusively developed for that specific type of door and was then adapted to other types of doors, primarily all types of metal garage doors. 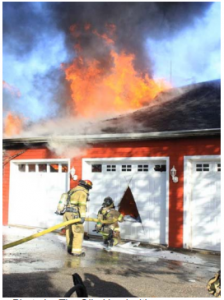 Another limitation of the teepee cut in relation to our specific discussion is the narrow opening at the top of the cut. This narrow opening does not allow for a good angle for hose streams to be operated into the upper reaches of the interior space and forces crews to be very close to the opening and in the collapse zone in order to do so. In the photo to the left, crews have made a teepee cut in a residential/light commercial overhead door at a well-involved outbuilding fire. The operation has gone defensive and a 2-½-inch hoseline is being operated into the opening.

Note the heavy fire venting though the roof that has obviously compromised the structure, putting these firefighters at risk being inside the collapse zone.

The narrow opening at the top of the teepee cut does not allow for much side-to-side movement of the stream, which in turn severely cuts down on the streams’ effectiveness, and the intent of opening the door and placing the line in service in the first place. Also, note the position in which the nozzle firefighter must be in order to direct the stream into the upper area of the interior space.

Being on one knee does not allow for rapid movement if he needs to move away from the structure. We must keep in mind our primary reason for opening the overhead door in the first place; either entry into the structure for attack and secondarily egress or for hose stream access. While keeping that objective in mind we then must choose the correct method for opening the door that allows us to achieve that goal.

In situations where entry into the structure is not a priority and hose stream penetration and movement is, there are several other options for opening overhead doors that will allow crews to achieve these objectives, keep them out of the collapse and still allow for entry later if needed and safe to do so. One of the best methods is known as the “Door-within-a-door” method.

This cut allows a large opening, hoselines and monitors to be placed at a safer distance and still allows personnel to enter easily later in the operation if called for. The best part is it only takes four fast cuts and minimal time. 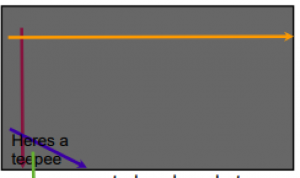 The first step in making this cut is to ensure that the overhead door you are about to cut is indeed locked. That whole “try before you pry” thing applies to cutting too. Once you have determined that you indeed need to make some sparks you choose which side of the door will open and which side will hinge. Whichever side of the door is going to open will be the one you begin cutting.

The first cut will be a vertical cut approximately six inches from the rail, beginning as high as the saw operator can reach or with the assistance of a ground or aerial ladder depending on the situation. The cut must extend downward to the ground, as close as possible. The second cut is a diagonal cut that is begun approximately two feet above the ground and beginning across the first cut.

This cut must again come as close to the ground as possible. Once the cut is complete, the triangular section that has been cutout can be forced inward (easiest) or pried out with a tool. This opening gives you sufficient access to the bottom rail to allow you to cut through it.

Having a hand-tool or two near by is very handy at this point. A Halligan can be slid underneath the rail and pried up to give some space to allow the saw operator to cut through the rail and not contact the ground. Other tools, such as an axe blade, can be used similarly. The fourth, and last, cut is a horizontal cut beginning across the first cut and extending all the way across the door.

The fourth cut should be made through the middle of a door panel as opposed to through a crease in separate panels. This is because the sheet metal and insulation found on most residential and commercial doors is much thinner and easier to get through than the supporting structural components that in many
cases can be tubular steel or aluminum.

It is also to remain clear of the hinges that are found attached to either side of the door panels at the creases. These hinges are in most cases hardened steel making them much more difficult to cut and the increased depth they present may not be able to be achieved by the saw blade, particularly if you are using a fiber metal blade on your saw, which is becoming progressively smaller as it is cutting. It bears to mention here that most citations on this method note that the saw should not be operated over the operator’s head.

This is for safety related to fatigue. Depending on the size of the door, the operator can become very tired operating the saw above his head, leading to the saw binding in the cut, kicking out and injuring the operator.

While using this method for operating hoselines for defensive operations it may require that as large an opening as possible be made to ensure that the streams can reach into upper areas of the interior. If this is the case and the operator needs to operate the saw over-head he should ensure that another firefighter is present to take over when he becomes fatigued.

Once this cut is completed, you are ready to hinge the door. It is very important to note that the door should not be hinged past 90-degrees on the track. If the door is folded past 90-degrees or completely off the track there will be nothing left to support the rest of the door and the upper portions will come collapsing down. Once the door is hinged, the track should be crushed or other precautions taken to ensure that the upper sections of the door cannot come down unexpectedly, especially if the opening will later serve as an entry/exit point for personnel. 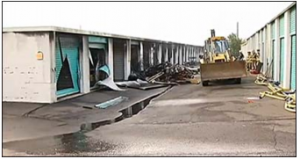 This article was not so much about the forcible entry aspect of opening overhead doors as keeping our heads in the game as to why we are doing so. We fall back upon our training and to what is familiar. These may not be what is best for the situation, however.

In the case of opening overhead doors for a defensive firefight, we have other options that will allow us a greater opening and more mobility with the stream while keeping personnel farther back from the structure. Hopefully this article will serve as a reminder that there are other options available to us to achieve objectives that are better fitted to some situations.

This article was not so much about the forcible entry aspect of opening overhead doors as keeping our heads in the game as to why we are doing so. We fall back upon our training and to what is familiar.

These may not be what is best for the situation, however. In the case of opening overhead doors for a defensive firefight, we have other options that will allow us a greater opening and more mobility with the stream while keeping personnel farther back from the structure. Hopefully this article will serve as a reminder that there are other options available to us to achieve objectives that are better fitted to some situations.