An Accountability Lesson from Hansel and Gretel

Everyone knows the tale of Hansel and Gretel. Two kids who get lost in the woods and leave a trail of bread crumbs to lead themselves back home. Well, while the method was not perfect Hansel and Gretel had a great idea and it is something we can use on the fireground.

Here are the two styles of door chocks I carry in my gear. While this may seem simple think about this scenario. You’re chocking the doors that you are
going through, but then despite your best efforts you get turned around, you think you know where you’re at, but then that anxiety sets in.

YOU’RE
LOST! You issue the MAYDAY and you give your LUNAR report and whether or not you include your name in the report at some point you will be identified.

Either through your MAYDAY report or when you give your unit number and position the accountability officer should have some form of accountability tag with your name, or it may be as simple as your company officer saying “I lost Johnny”.

At some point the RIT is going to be activated and they will know who the person is they are looking for. As they crawl into the building their flashlight sweeps over a door and they see a chock with writing on it “Isn’t that Johnny’s initials/name?” “He must have gone this way”.

Any hint we can give the RIT as to our location will do nothing but improve our chances of surviving a MAYDAY event.

Here are 2 other types of chock I carry. One is called a “hinge hook” the other is a “cherry bomber”. In order to make these more visible I have added some reflective striping. This way they will be more eye-catching to a RIT, because door hinges usually don’t glow or shine back at you, so they may be more inclined to investigate it.

If they do happen to investigate then just like the door wedges they will see an identifying mark as to who it is and who could have been through the area. You can even add this reflective striping to your wedges to enhance their visibility. You can add your company number or another identifying mark that will help lead a rescuer to you.

The point is that this simple thing could pay huge dividends when involved in a MAYDAY situation. This is our “bread crumb trail” and can be just one more tool in your tool box to help you in your time of need. We should be chocking doors anyway, why not take advantage of this and make it work for us.

At minimum putting your name and company will enhance the chances of your chock getting returned to you after a fire.

So take some time for “chock enhancement” it could pay off for you in the end.
As usual thanks for reading, spread the word, and STAY SAFE! 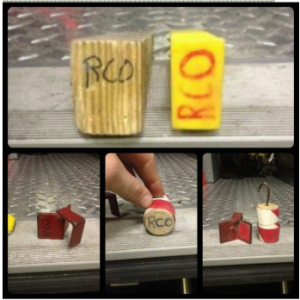